On the 4th June, BBC Radio 4 did a section on the London International Wine fare discussing the latest market trends.

The major talking points were low-alcohol wines and emerging wine countries such as Canada, Mexico, Croatia and Lithuania. Incidentally Canada is number 32 on the world’s list of total wine output. Croatian wine succeeded by getting Marks and Spencer’s to stock it’s Pilato Malvazija Istarska. Another country to ‘up’ it’s game in the wine market is Georgia, although there is some debate as to whether this is an emerging wine producer. Evidence says that wine producing in the country goes back 8,000 years. Georgians use a Qvevri to produce wine, which is a giant clay, egg-shaped pod which is inserted into the ground. Using red or white, the grapes are placed into the Qvevri (see image below) with absolutely everything included (the pip, stalk, skin, the lot) to give a more natural wine taste. A hole is then dug out and the Qvevri is then placed into the ground. 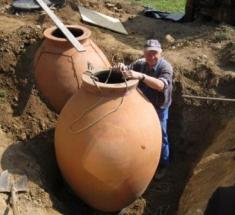 There has been this small increase in the amount of wine with a lower ABV (alcohol by volume) content, which was partially spurred by the increased duty on wine (with a higher alcohol content). CJ and PK authors of the @SedimentBlog were at the London  International Wine Fair and weren’t too keen on this notion of having lower ABV wines (quoted on BBC Radio 4). Paul Keer (the PK in CJ) believed that the trend still remained for full bodied reds, thanks to American critics such as Robert Parker:


“There’s been a tremendous fashion for much more full-bodied red wines over the last few years, partly driven by the American critics. A lot of the world’s been trying to produce this much richer and more powerful red wine”


Mascarto from Australia is a notable low alcohol wine label. His partner Charles Jennings wasn’t overly keen on wines with a lower ABV. He felt that Brits shouldn’t have anxieties over the alcohol content in wines.


“I think concentrating on the amount of alcohol in a wine makes me nervous. I think it prays on a basic anxiety that the British have about drinking “…this is a sort of fake way of saying you can carry on ‘tippling’ but it’s not going to be so bad for you. It’s not addressing any larger issues about why we drink wine, and I think to highlight it in this way really points out the problem rather than providing much of a drinkable solution”


These emerging wine countries may well be on the horizon, but a traditionalist would still argue that the established French wines of the Bordeuax and Burgundy still acquire much more prestige, and can grow in value over time. There is little evidence to suggest that wine purchased from these emerging countries provides significant returns. Much of this demand recently has been fueled by India where wine consumption is expected to reach 14.7 million litres by the end of 2012 according to the Associated Chamber if Commerce and Industry of India – registering a growth of 35 per cent over the last 4 years! India has become the 10th largest growth nation for wine consumption. France retains it’s title for world’s leading exporter of wine, ahead of Italy and Spain having delivered consignments abroad worth $9.731 billion (source: indianwine.com/blogs). This surge in demand from India is why French wine still remains attractive to sellers.


Building on from the emergence of new wine producers, Chris Jennings also said that he was concerned British supermarkets were overwhelming consumers with choice.


“The shear profusion of wines available from so many different countries & so many different takes on wine… “then feeds back to the consumer’s experience which becomes just a muddle. Supermarkets will tend to say ‘well we have this wide variety on offer because it educates people, they can learn more’ but they don’t! The way you teach somebody is not to deluge them with potential information and difficult choices (which they are not necessarily able to make), but to simplify things. There should be fewer wines in the supermarket, not more!”


Choice at the supermarket does have it’s pitfalls, particularly if consumers aren’t informed enough to make a best decision. Paul Keer added, “I’m bewildered [by the wine fair] there’s so much on offer here. When I go to buy a chicken I like to have 3 to choose from , when I go to buy wine I’m now presented with 300 [at my local supermarket], it’s completely bewildering.”