A RECOVERY IS ON THE HORIZON AFTER LAST YEAR’S CORRECTION
A recent article in the Financial Times (19th July 2012) will come as a relief to many buyers and sellers of fine wine. The last 12 months have been a bit of a whirl wind in the fine wine market; the Greek debt crisis, recession and rising unemployment across Europe have played their part but more significantly, there were concerns that first growth prices had been slightly over-valued. The Liv-Ex 100 index was reported to have risen by a staggering 76 per cent.

Much of this price rise was caused by increased demand from Chinese investors, headed by Chateau Lafite. However, the Chinese economy suffered a blimp half way through 2011 leading to a fall in demand. Many analysts concluded that many wines were being over-priced. Many markets such as, Hong Kong, had even reached saturation point and were put off buying any more. The 2010 en primeur campaign did not help Bordeaux as it had been mismanaged and grossly over priced. This fuelled resentment amongst investors and collectors, who simply did want to pay too much for wine that hadn’t even left the barrel. Lafite was hit hard, followed by Latour, Haut-Brion, Margeaux and Mouton who were hit modestly.
But here’s the good news, merchants in the market learnt from the mistakes made in 2008 and didn’t rush into selling off their stock. Wine does after all, increase in value once it is matured. Many merchants held onto their stock and were prepared to weather the storm until the market conditions improved. Rather than under-cutting their prices merchants opted for ‘price-correction’, which meant giving their stock a more realist price. Whilst this price correction proved effective in preventing the kind of panic-stricken mass selling witnessed in 2008, it was nonetheless serious and prolonged. In the last six months of 2011, the Liv-Ex fell 21.5%, finishing the year on 286 points, a 15% reduction on last year.
But every cloud has a silver lining, and some second growth Chateaux actually benefited from the price undercuts, these included: Pontet-Canet, Beychevelle, Lynch-Bages and Pichon Baron.  During the same period in 2011, demand for ultra-fine Burgundy shot up. One variety, Domaine de la Romanée-Conti (DRC), along with de Vogue, Leflaive, Roumier and Rousseau saw demand rocket and replaced Lafite as the ‘must-have’ commodity of the secondary market. This Burgundy revival saw massive improvements in the market and saw the Liv-Ex grow another 2% in May 2012 and is now up 19% on last year’s values (source: FT.com). 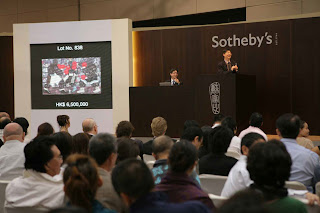 China and India’s wealthiest may well have had taste for Burgundy (and Tuscany of Italy) of recent but as the Financial Times has stated the quantities are simply too small and modish to satisfy a demanding international market in the long run. Financial Times also states “it would be foolhardy to write off Bordeaux for too long. Great Bordeaux is like the timeless ‘little black dress’ which never goes out of fashion”.  Early signs seem to be positive, not only did many wine merchants report more European buyers returning to the market but that the amount of buyers were outnumbering sellers by two to one. Sotheby’s auction in Hong Kong saw growth of 40.9% year on year. Furthermore a recent report in Decanter (http://www.decanter.com/news/wine-news/530063/eurozone-crisis-may-trigger-wine-bubble-say-experts) found many investors are seeking refuge in fine wine, in light of the uncertainty surrounding the European single currency. This law in economics can be attributed to “Gresham’s Law”, said Joe Roseman, on Decanter. Joe is a former hedge fund economist and author of SWAG (Silver Wine Art Gold) – a book on alternative investments who is also quoted saying:
“Stated simply, it means that bad money drives investors to seek good money. In this instance, the bad money is the euro currency and the good money is an asset like wine.”
Slightly more cautious advice has come from Henning Thoresen, CEO of Bordeaux Winebank Group and manager of the €50m Wine Growth Fund, he reckons that despite many Asian investors questioning the Euro’s validity it shouldn’t affect the image of fine wine as a good long-term investment.
“We are advising them to stay calm,’ he said. ‘We have a ten-year horizon and I don’t think the eurozone situation will affect wine as a long-term investment.”
Andrew Della Casa, Director of the Wine Investment Fund, is very upbeat on the other hand. He is quoted as saying in the Financial Times that the market should grow at “a steady 10 per cent” by the end of 2012.
“Falls such as those in 2011 have generally been followed by strong returns for those investing at the right time” adding that “We believe this could be the right time and predict double-digit growth this year”
This cautious optimism exists on the basis of new money flowing into the market. Robert Parker also helped to provide a timely boast to prices with his revised scores for 2009 vintage. With 2012 being the Chinese year of the dragon, it is hoped that the Chinese love affair with fine wines (including Bordeaux and Burgundy) should continue to flourish. Most of this recovery does however depend on consumer confidence. Some wines did benefit from an expensive en-primeur campaign and some wine investors predict that the economy should grow between 14-18 per cent by the end of the year. Buyers and sellers may well be taking a more long-termism approach but the future should remain strong for the wine market.
By continuing to browse the site you are agreeing to our use of cookies.